A member of the Ten American Painters and an important figure in the Boston School, Frank W. Benson was one of the first American artists to combine the figure with the Impressionist landscape. His images of women and children in sunlit meadows and hillsides established Impressionism as a major style of painting in America. These works are among the most beloved American Impressionist canvases today.

Benson is also known for his indoor figural depictions which convey the quiet contemplative spirit of the genteel age and for paintings, etchings, and watercolors of sporting subjects, especially of fishing and hunting, which he rendered in the later portion of his career. Benson’s fame and financial success lasted throughout his professional life. He was one of the most popular artists of his era, and today his paintings are widely reproduced and considered among the most beautiful works in American public and private collections.

Born in Salem, Massachusetts, Benson was a descendant of a family that had settled in Salem during the Revolutionary era and had prospered in the maritime trade. He grew up in privileged circumstances, engaging in sporting activities of tennis, fishing, and hunting, which he enjoyed for the rest of his life. e

From 1880-1883, he received his first art training at the newly founded School of the Museum of Fine Arts in Boston, where he met fellow artists and life-long friends, Edmund Tarbell and Robert Reid. In 1883, Benson traveled to Paris and continued his studies at the Académie Julian under the instruction of Gustave Boulanger and Jules-Joseph Lefebvre. During his French years, he copied Old Master paintings at the Louvre and spent summers in the country. During the summer of 1884, he visited Concarneau, Brittany, where he met American painters, Alexander Harrison, Arthur Hoeber, and Edward Simmons, and was influenced by their somber palettes and genre subject matter.

On his return home in 1885, Benson rented a studio in Salem, Massachusetts and began to exhibit at the Boston Art Club and the National Academy of Design in New York. In spring or fall of 1887, he taught at the Portland School of Art in Maine. In the next year, he moved his studio to Boston and was married to Ellen Peirson, a childhood friend. Although the couple settled in Salem, much of Benson’s life revolved around the Boston art world after he became an instructor at the Museum of Fine Arts School in Boston in 1889. Along with Tarbell, who began to teach there at the same time, Benson helped to establish the school as one of the outstanding art instruction facilities in the United States.

Benson spent the summer of 1890 in Dublin, New Hampshire, where he came to know other artists who summered in the area, including Abbott Thayer, George de Forest Brush, and Rockwell Kent. In Dublin, Benson created a number of landscapes, but he returned to his emphasis on the figure in the early 1890s, when he created a number of interiors, which feature elegant women in darkened rooms lit only by firelight and oil lamps.

Benson had achieved a position of renown in the Boston art scene by the early 1890s. In 1891, he had his first important show, a joint exhibition with Tarbell at J. Eastman Chase’s Gallery in Boston. Around the same time, he became a member of the Tavern Club, where he made the acquaintance of many well-to-do Bostonians who purchased his works. Through the Tavern Club Benson met the prominent expatriate painter, John Singer Sargent, whose art had an influence on his.

In the early 1890s, Benson participated in the interest in decorative art that accompanied the American Renaissance era. In 1893, he created murals for the Chicago World’s Columbian Exposition, and a few years later he took part in the decoration of Boston Public Library, creating murals for the vault of the library’s south corridor.

In 1898, Benson joined a number of painters from New York and Boston, including Tarbell, Reid, Simmons, Thomas Dewing, Childe Hassam, J. Alden Weir, and John H. Twachtman, to form the Ten American Painters. This group, which broke from away from the Society of American Artists (the principal artist organization of the time), consisted of several of the most advanced and talented artists of the era, many of whom were working in the French Impressionist style. Benson exhibited in all of the Ten’s annual exhibitions, which were held for twenty years.

Two sources influenced the Impressionist style Benson formulated around the turn of the century. He was inspired to explore the modern French approach by both his friends in the Ten and by the sunlit countryside of North Haven Island, Maine, located in Penobscot Bay, where he summered beginning in 1901. Benson first saw North Haven during the summer of 1900, while staying with friends in Ogunquit, Maine.

From Ogunquit, Benson traveled to North Haven, where he visited the farm of Levi Wooster, which stood on Crabtree Point. The artist was immediately enamored of the locale with its open sunlit hills that offered views out to sea, and the next summer, he returned to the island and rented Wooster Farm. He would make annual visits to North Haven with his family for the rest of his life.

On North Haven, Benson posed his wife, Ellen, and his children, Eleanor, Elisabeth, George, and Sylvia, on hillsides and at the water’s edge, and created vibrant painterly images that seem filled with light and air. Showing his daughters usually clad in white, their dresses and hair blown by the ocean breeze, Benson’s North Haven paintings express the essence of refined summer pleasures. As William Howe Downes remarked in 1911: “He sets before us visions of the free life of the open air, with figures of gracious women and children in a landscape drenched in sweet sunlight, and cooled by refreshing sea breezes.”

By contrast, in his studio during the winter, Benson maintained a more traditional approach, depicting quiet interiors inhabited by carefully wrought figures. These works were influenced by the Dutch Little Masters, Vermeer in particular, and by Benson’s academic training. Benson’s interiors resembled those of Tarbell, who had initiated the Vermeer revival in America, and it was for these works that Benson has come to be known as a leading figure in the Boston School.

In the 1920s, Benson focused on another sort of imagery. Always a passionate naturalist and outdoorsman, he gave his attention to portraying wildlife, sporting, and hunting scenes. His depictions of these subjects in oil, watercolor, pen and ink, and etching were extremely popular. 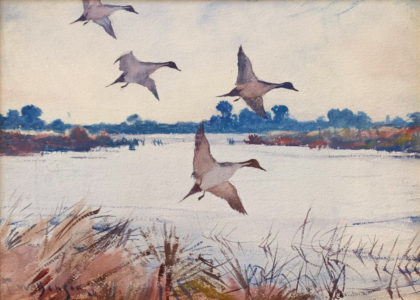 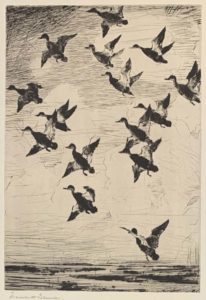 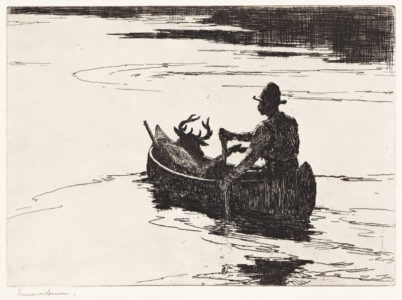 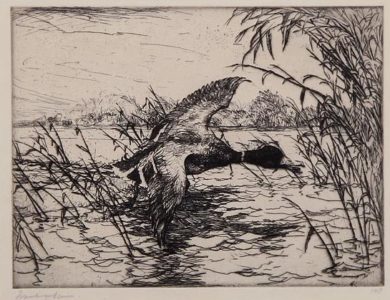